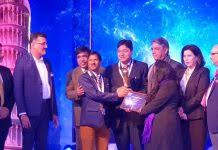 Odisha has bagged the ‘Tourism Brand of the Year’ award at SATTE 2019, the biggest travel and tourism trade exhibition of South Asia adding another feather to its cap.

The award was given to the state tourism department recently for taking initiatives to position the ‘Odisha Tourism’ brand strongly at national and international levels.

The three-day show, held from January 16 to 18 at Greater Noida in Uttar Pradesh, was attended by around 1,000 exhibitors as well as travel and tourism representatives from over 50 countries and 90 cities from all over India.